Tass was born in Gaza, reared in Saudi Arabia and Qatar, ran away from home at the age of 17, joined Fatah in the late 1960’s, and become a PLO sniper for Yasser Arafat. In 1974, he moved to the United States to study at the University of Missouri, Columbia. He met and married an American girl, Karen, and became a successful restauranteur. In 1993, Tass experienced a powerful conversion to Christianity, and now has a love for the Jewish people he had hated so strongly in his youth. Listen to his powerful story. 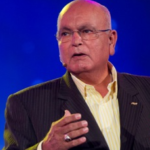